Anyone who is after proper drum set miking for their next recordings will find themselves superbly equipped if they choose the e 600 Drum Set. Each of the microphones has inherited special characteristics from the last few decades of music history.

Miking the drum set for your first demos or studio projects? The first gigs? The large e600 Drum Set is ideal for this. Co-developers and evolution experts Heinz Epping and Sebastian Schmitz nod : “In some ways the e 600 is rough and straight but always with a convincing sound.” A look into the set: 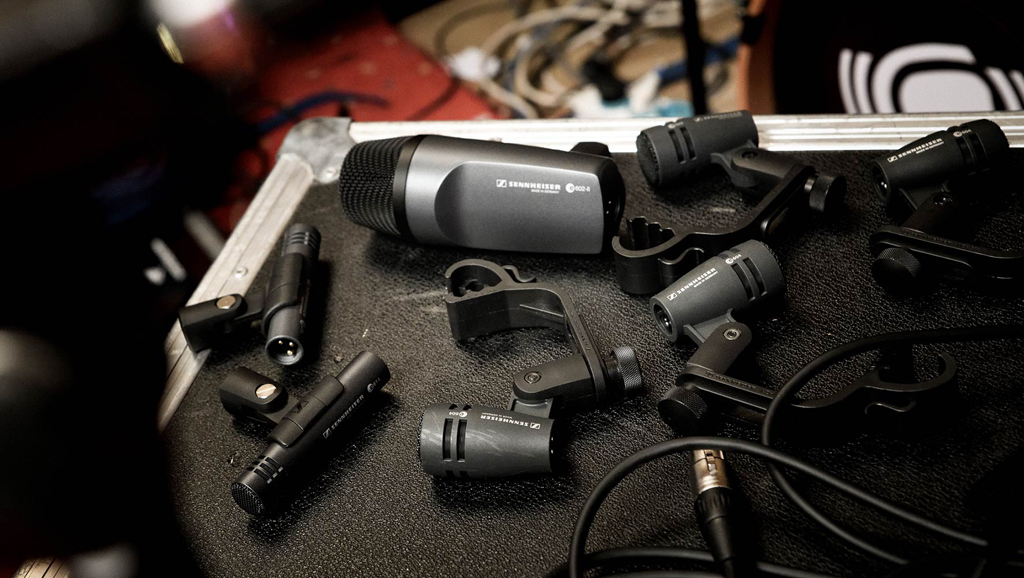 Everything you need for a rich, powerful sound: the 600 Drum Set is like a made-to-measure suit when it comes to meeting the requirements of the kick drum, toms, snares and hi-hats.

In acoustic terms, a kick drum/bass drum is an inhospitable environment, because very high levels of resonance are generated in the internal space. “If you simply hold a microphone inside it, it sounds nothing like what you would expect”, clarifies Schmitz. If miked directly, the high degree of resonance in the internal space would result in an unpleasant sound. “The trick”, says Schmitz, “is getting a sound like you would expect: the bass ought to make your stomach flutter – and there should be a fine attack in the upper ranges.” The e 602-II is geared towards precisely that: Its frequency response curve is constructed such that disruptive feedback interferes with neither the solid nor the fine part of the drum sound. In the bass range, the e 602-II is in fact designed to be more aggressive than the e 902. In studio settings, the 600 series delivers its beloved and typically solid impact. For live stages, the rich foundation in the lower frequencies often has to be cut back a bit in order to avoid uncontrolled bass response. “But with a recording – with a recording that sounds amazing”, says Schmitz.

The e 604: Proven all-rounder on the tom and snare

The e 604 has already been our mic of the month in July. What it achieves on toms and snares – and how it gets its sound from old legends: read all about it here.

Cymbals produce extremely dynamic, impulsive sound waves and need lots of character in the high frequencies. The two e 614s – which are small-diaphragm condenser microphones – are perfect for meeting this challenge. They remain precise even at extreme sound pressure levels. Above all, however, their sound is impressive thanks to the outstanding impulse response. The e 614s follow the challenging dynamics with an extremely rapid transient response.