On the one hand it is generous, on the other, unusually precise. In the first few years its sound was considered “pretty German”. Well, alright. More accurate would be: The e 845 is so precisely tailored to phonetic subtleties that it was a surprise to some ears. Because it has very precise ‘hearing’ even in the upper frequencies.

Among the best for singers, songwriters and speech-focused genres

It was imperative that when the product made its market debut it should be better than the norm. And indeed, the e 845 belongs to the pioneers, to the firstborn of the evolution series. As soon as it was born, it received characteristics that other providers were marketing as premium features – for example the supercardioid pick-up pattern. As a result the microphone focuses more clearly forwards and becomes less sensitive to sound waves from the side. It also copes relatively good-naturedly with a variety of distances. “If you move about more on the stage, if the distance between your mouth and the microphone varies now and then, the effect is not as great”, is how Product Manager Sebastian Schmidt describes the mic’s advantage. However: “The e 845 is a very fine-resolution product and offers huge speech intelligibility. This is perfect for singers, songwriters, for smaller groups of performers or for more speech-focused genres. The e 845 shines wherever it doesn’t have to assert itself against an entire band. On loud stages, when one or two amps are running, it would need EQ assistance. If we are talking about the ability to get through in a mix, then off the top of my head I would say the 900-series vocal microphones are the superior choice.” 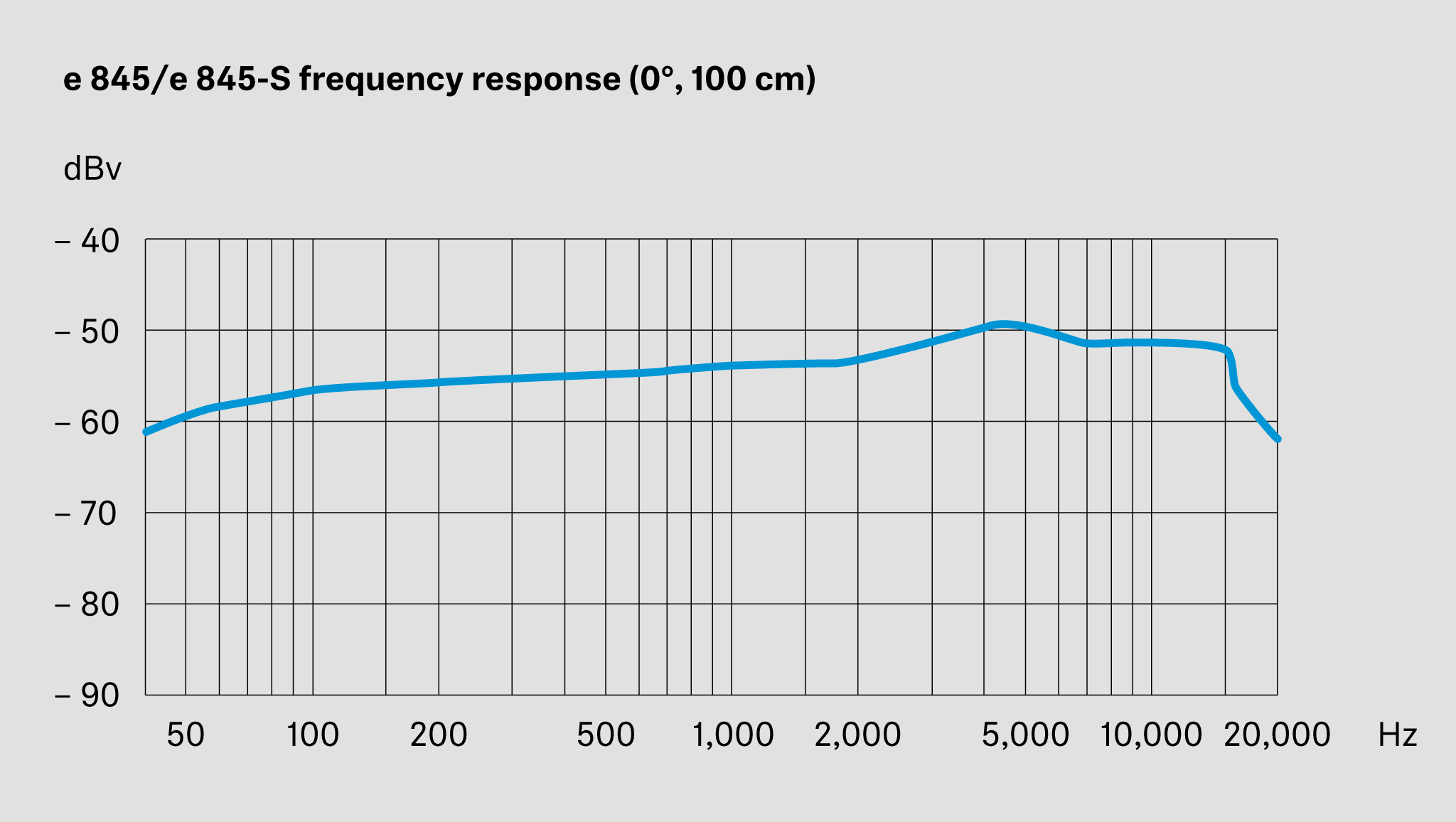 The brief elevation at 4,000 Hz gives the e 845 a bigger presence that extends to those high frequencies important for understanding speech and song – in any language.

“It doesn’t sound ‘German’, it sounds like the whole world”

A more precise look at the frequency response shows a gentle elevation in the area around 4,000 hertz. For human speech and vocals, this already constitutes the upper sound ranges. Particularly high-frequency sibilant sounds and consonant peaks begin and end in this range. Schmitz and Heinz Epping seem to be almost grinning as they look at this “nose”. “In the first years following the market launch, a few people said that the e 845 sounded “German”. That is both right and wrong. It has a lot more to do with an awareness of phonetics. We effectively had to listen to the tongues of the whole world during development to ensure that the microphone could do its job correctly in any language”, says Epping. He explains that German, for example, is very consonant-heavy, the tongue often extends forward with many formants being generated in the area around the front of the mouth and lips. American English, on the other hand, is characterized by rhotic trills, its longer vowels and typical vowel centralization. Something that is clearly articulated in one language is more of an acoustic by-product in another. “We therefore have to capture the typical American Drawl just as confidently as our hard consonants or French nasal sounds”, clarifies Epping. And in this respect the e 845 is simply multicultural. It is not designed for the peculiarities of one language, but for all. This results in a big presence, also extending into the higher ranges. In the period up until the end of the 1990s, with microphones which were mostly focused on the middle range, this was rather unusual. And it is still sometimes unusual nowadays. Schmitz:

"Back then we wanted to go a step further, do something better. And that is something you can still hear in the e 845. And not just in Germany, but in any country where artists or speakers are relying on the e 845."