With the e 602-II, you will get more out of your kick drum: bass sounds with more punch, more precise attack and more transparent high frequencies. Below you can find out why.

On the desk in front of portfolio manager Sebastian Schmitz, two additional microphones are lying next to the e 602-II: an e 602 and an MD 421. “Without these two, the e 602-II wouldn’t exist.” Inquiring looks. “Well, you see, specialist microphones for capturing the sound of kick drums are still in their relative infancy. They didn’t come about until the mid-1980s. Before this, the miking of kick drums was usually done with all-round microphones – both in the studio and for live productions,” explains Schmitz. “One of these was our MD 421, which produced very good results.” This is not surprising – after all, the MD 421 is still one of the most well-known, versatile microphones in the world.

The MD 421 is one of Sennheiser’s most famous microphones.

“We then, when developing the evolution series, also designed a specialized kick drum microphone – the e 602 – into which we incorporated the tried-and-tested transducer from the MD 421. This was an obvious thing to do,” continues Sebastian Schmitz. To adapt it better to its task, the frequency response of the e 602 was however pre-formed – which was not the case with the MD 421. This has made it possible to reproduce more deep bass sounds on the one hand and more powerful attack on the other.

Fashions change in sound perception too

“With the e 602, then, we had our first dedicated kick drum microphone and it was ideally suited to the stage,” explains Schmitz, “but there were two factors which prompted us to develop things further: the costs for our customers and their sound esthetics.”
Indeed, as part of the 600/800 series – known for being outstanding value for money – the e 602 was still relatively expensive. This was because its transducer was, as with the MD 421, made by hand, whilst the capsules of the other evolution microphones were already being made using automated processes in Wedemark, Germany. The engineers therefore designed a completely new transducer which could be manufactured on the automated, highly precise production line – and could therefore be offered more cheaply without sacrificing any quality. 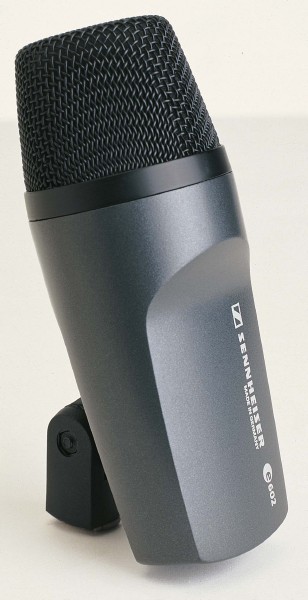 From the outside, almost indistinguishable: the e 602, forerunner of the e 602-II

“Where the sound is concerned, we have modernized the frequency response of the new e 602-II,” explains Schmitz. This becomes clear from its elevation which starts as soon as 50 Hz, resulting in even richer deep bass tones and a significantly expanded elevation at 2 - 15 KHz. But why, actually? “Talking to musicians and sound engineers confirmed our impression that, with bass drum microphones, greater power and transparency were now required.” This was due firstly to the ever increasing diversity of musical styles, and secondly to a general shift in terms of auditory perception: “It was clearly noticeable that sound esthetics had moved on, like a fashion,” recalls Schmitz.

"There was this trend asking for a more ‘modern’ sound from the kick drum; that is to say more resolution, greater openness and a fuller range of sound."

The subsequent field tests showed that the new e 602-II could provide the desired modern kick drum sound effortlessly. Even without the intervention of the EQ, it already offered a balanced sound whose carefully coordinated frequency graduation helped the entire rhythm section to achieve a harmonious presence.

“As a result, the e 602-II is – particularly on small- to medium-sized stages – an excellent choice for bass drums. It produces a beautiful, deep impact, delivers precise attack across the entire frequency range and supplies the desired transparency in the high frequencies”, is how Sebastian Schmitz sums it up.

The e 602 still had a die-cast zinc housing and weighed 550 g. In the e 602 II, aluminum is used, which is why it weighs a mere 318 g. This low weight means that it can also be positioned easily and securely on widely extended microphone arms. What is more, it is magnetically shielded, in order to reliably filter out potential sources of interference.