“Just ten years previously, Sennheiser would never have sold such a microphone”, the Sennheiser employees say as they recall the development of the bass specialists e 602 and shortly afterwards the e 902.

What prior to that would have been deemed ‘blasphemy’ became, with these specialists, a good sound. It took many, many practice sessions, however, before the sound of the e 902 was deemed satisfactory by the team.

The unusual, hitherto unthinkable feature is the clear shaping of the frequency response with the e 902 as well. In other words: an intentional, targeted and audible interpretation of the sound. This flew in the face of the basic approach of the Sennheiser microphones from the time, namely that of achieving constant neutrality. A frequency response curve that was as flat as possible, i.e. neutral, was (and still is, in many applications) considered the ideal: no interpretation, no emphasis, just the sound in as pure form as possible. The evolution series – back then still in its early days – was part of a transition. Instead of simply being neutral, some microphones were now allowed to – and supposed to – support the sounds users had in mind. The evolution series was more than just a new range. It also changed parts of the in-house philosophy.

Anyway, by then it was no longer only ‘generalists’ – i.e. microphones for use in as many applications as possible – that were required. Specialists were allowed too. At the Sennheiser headquarters, Heinz Epping and Sebastian Schmitz leaf through and click to and fro in their development documentation from 2004. Schmitz describes the initial situation:

"If you position as neutral a microphone as possible in a bass drum, you get a sound that initially reminds you of a cardboard box. You have a huge amount of self-resonance in the low and medium frequency ranges which destroy the magic for you. Although you then get a linear, “genuine” sound from the cylinder, you are not getting the sound you are expecting or hoping for."

The search for the right sound

But what is the “right” sound, the sound “as per expectations”? Epping and Schmitz look at each other, and it seems that the discussion from that time has not been forgotten. In order to describe it, Schmitz holds up both hands. “The bass should make your stomach flutter and…” – his fist smacks into his open hand – “…and here, during the attack, it should go thwack. You need a rich foundation “below” and a certain something “above” – and it is precisely this, for starters, which you do not get with a neutral microphone.” For this reason, there is a clear drop visible at 200 and 700 Hz in the frequency response curve of the e 902. The microphone blocks out the critical resonance ranges from the inside of the bass drum and focusses on the sound which any onlooker would expect. As a result, right from the first soundcheck, the e 902 sounds extremely defined. The fact that it deliberately interprets the frequency response curve to do this is an exception and reflects the basic promise of the 900 series: each microphone should produce a solid working base, without subsequent equalization assistance, without calibration, without major tricks at the mixing desk. Musicians and sound engineers should not first have to look for the basic sound. They obtain a working base immediately and can design and interpret this sound directly to suit their style. 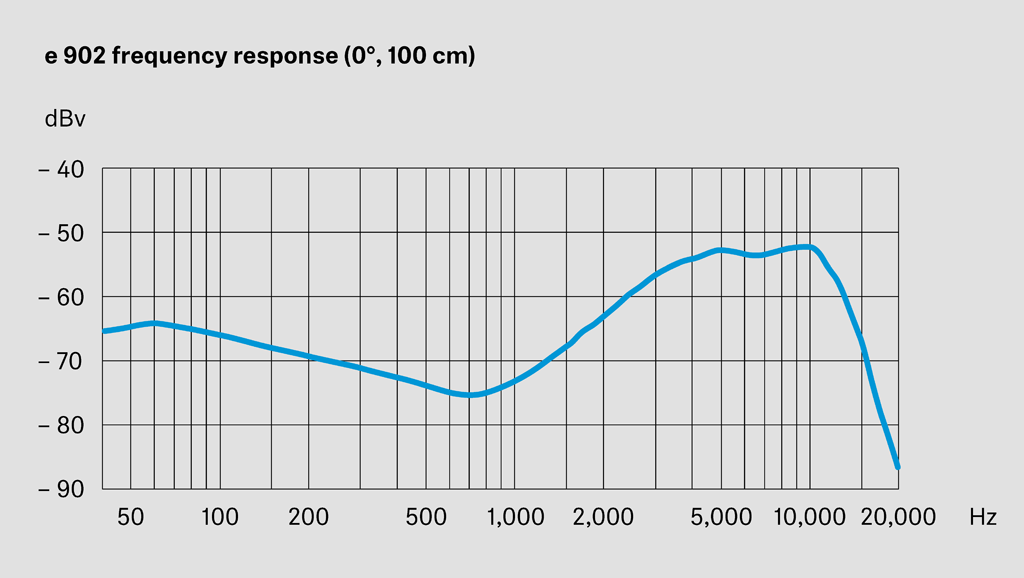 Two clear drops in the frequency response curve make the difference: The e 902 blocks out intrusive self-resonances in the areas of 200 and 700 Hz in order to deliver a rich bass and clear attack. This kind of targeted interpretation was new to Sennheiser at the time.

A lot of time passed, however, until the right balance was found. “We needed a long time with the e 902, they were huge iteration loops”, recalls Heinz Epping. With up to three prototypes, the team travelled to listening sessions and met musicians and sound engineers from live stages, both big and small. “Too many clicks in the upper frequencies, too boomy, high frequencies undefined”, is what is written on one of the first evaluation sheets from 2004, followed by suggestions for precise changes to the frequency response curve. The aim was clear: get a dry bass, set the central drop correctly and make the attack sound clearly defined. There were exotic outliers, too. One prototype, for example, gave each bass drum a typical speed metal quality – the reason for this was a boost at 1.6 KHz which resulted in a typically shrill sound. Schmitz chuckles:

"This was a good example of what we didn’t want: the e 902 was not supposed to provide ‘typical’ characteristics. You adjust these yourself through positioning and work at the mixing desk. We provide the expected basis for doing this."

The e 902 did not come into being alone but in parallel with a boundary microphone, the e 901. A key difference: the e 901 is a condenser microphone. The lighter diaphragm reacts more quickly and in a more sensitive way to impulses, and reproduces transients more flexibly. The result: “You get more attack, the e 901 sounds even drier. If you operate both together, you can bring together the best of all worlds.” However: “The e 901 is a Ferrari. You have to know how to drive it. It provides a huge number of subtleties and possibilities. You need to bring along time and a listening ear, but you are rewarded with a beaming smile.”

After several months with listening sessions and development runs, the feedback changed – the happy medium for a “bass sound as per expectations” had been found. For its production the team specified very, very narrow tolerances. “We take a huge amount of trouble with regard to the selection. We also very much stand out in that respect in market comparisons.” Since 2005, the golden balance has remained unchanged. The discerning selection guarantees that, for 14 years now, every e 902 has been providing precisely that sound which one hopes for from their bass instrument.

Months later – and after expert handling of the proximity effect in bass drums – the perfect combination had been found, confirmed and was ready for production. 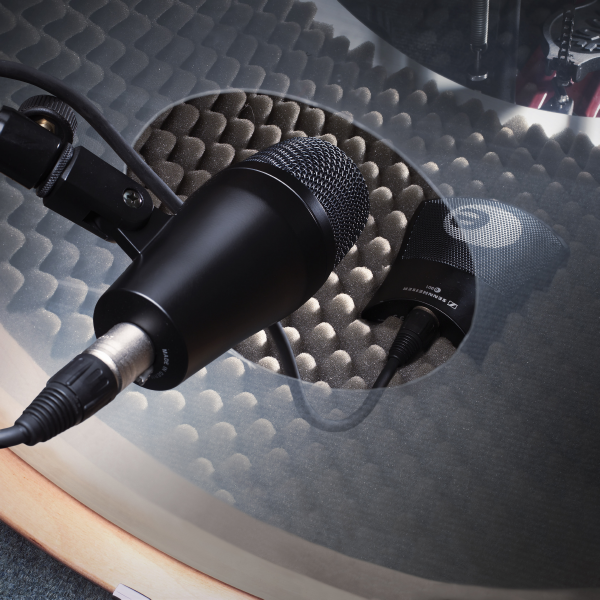 The boundary microphone e 901 was developed by Sennheiser together with the e 902 as a specialist for bass applications. With its diaphragm, it delivers even more subtle transients. “It is a Ferrari. You have to know how to drive it”, is how Schmitz describes the condenser microphone.