With the dynamic e 935 microphone, your voice gains significantly more presence and clarity. It literally brings your singing “to the fore” in the band mix. Below you will find out why.

“On the stage, you essentially always have the same trial of strength: Who is louder? How present are you in the mix? But this is not a fair contest, as when singing you only have your voice and a microphone. Using only these tools, you are required to assert yourself – against the powerful amps of the electric guitars, energetically played drums, and sweeping ranges of sound from the keyboard. In principle, you can make instruments as loud as you like, but not your voice.” The way in which Sebastian Schmitz, Portfolio Manager at Sennheiser, says this makes him sound more like a sports commentator than a sound engineer. “This was our precise starting point when developing the e 935. We asked ourselves, why exactly is this actually the case?” And he explains how the engineers working for sound editor Gregor Zielinsky painstakingly analyzed this in 2002: they asked dozens of sound engineers and musicians, and performed numerous measurements under real conditions and in the laboratory.

The results of the measurement series provided starting points which were already known about in some cases, but also new findings. Of course the biggest problem was the feedback: “If you make the vocals louder, then at some point you will get feedback. We wanted to shift this physical boundary” explains Schmitz.

"With the e 935 we have given singing more bite. It makes the voice more muscular in a positive way and compensates for the electroacoustic disadvantage of the singer compared with loud instruments."

However, the most important innovation did not tackle the volume itself but the frequency response: “The range 2.5 - 3 KHz gives the voice a particular presence. Unfortunately, those are the frequencies also often claimed by the electric guitar. So we significantly increased this range when fine-tuning the e 935”, continues Schmitz. The solution was amazingly effective: “Suddenly it was no longer that important to make the singing louder – it asserted itself much better virtually automatically. And not only that. After the first tests, the sound engineers confirmed to us that the voice was not only present in the mix but also came across larger and more clearly,” recalls Sebastian Schmitz; he adds: “This solution has one disadvantage, however: The e 935 is less forgiving of errors. Whereas in the past small blunders went unnoticed, you now hear everything very clearly, particularly in the case of the harmonics. During the tests this resulted in a few, let’s say, epiphanies, among the singers.” (laughs) 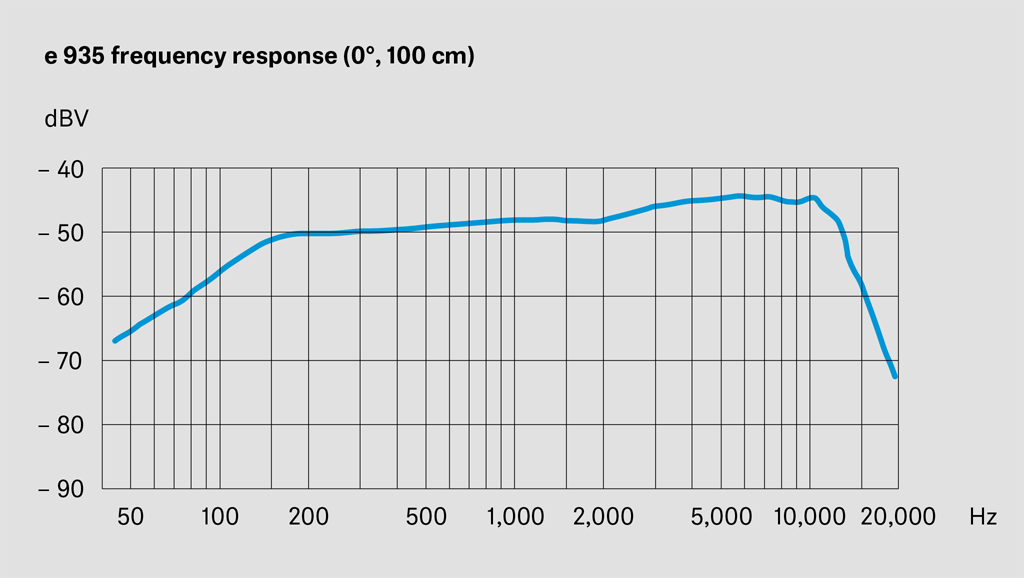 Clearly recognizable: The elevation of the frequency range 2.5 to 3 KHz with the e 935

The construction of the e 935, however, presented the Sennheiser engineers with additional challenges, as it required large-scale production to be particularly precise. The stringent requirements placed on the evolution 800 series had to be exceeded still further. And so, over months of detailed work, the processes were fine-tuned until the desired, extremely low tolerances had been complied with. “Each technical solution offered by the e 935 was, in sound terms, a huge step forward – and a challenge in terms of production. Ultimately, however, we were able – without making any compromises - to build precisely that microphone we had designed, and in large quantities. Yes, we are a little bit proud of that fact”, summarizes Schmitz, as he weighs the e 935 contentedly in his hand.